We first acknowledge the indigenous people of our region: the major tribes being the Gooreng Gooreng, Gurang, Bailai and Bunda peoples. Native title register details are here. You can read their strategic plan here. The following Land Boundaries map is taken from page 7 of their Strategic Plan. 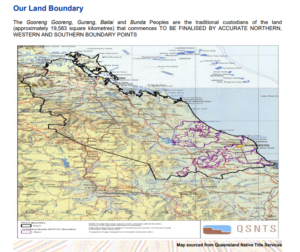 From Wikipedia: In May 1770, the HM Bark Endeavour, under the command of James Cook, sailed by the entrance to Gladstone Harbour under the cover of darkness. Matthew Flinders, during his 1801–1803 circumnavigation of Australia, became the first recorded European to sight the harbour in August 1802. He named the harbour Port Curtis, after Admiral Roger Curtis, a man who was of assistance to Flinders a year earlier at the Cape of Good Hope. John Oxley conducted further exploration of the harbour and surrounding countryside in November 1823. Oxley was dismissive of the region, noting the harbour was difficult to enter, the countryside was too dry, and the timber useless for construction purposes.

Nevertheless, in 1847 the British attempted to establish the new colony of North Australia at Port Curtis.[8] Colonel George Barney was chosen to lead this experiment in colonisation and his expedition was eventful. On 25 January 1847, the Lord Auckland, carrying 87 soldiers and convicts, arrived off the southern entrance of Port Curtis and promptly ran aground on shoals off the southern tip of Facing Island. The settlers spent seven weeks on the island before being rescued by the supply ship Thomas Lowry and delivered the intended site of settlement, the region now known as Barney Point. On 30 January at a proclamation ceremony, Barney was sworn in as Lieutenant Governor of the colony of North Australia.[9] The convict settlement lasted barely two months and cost the Imperial government £15,000.[10] A change of government in Britain ordered the withdrawal of Barney and the settlers. However, interest in the region remained.

By 1853, Francis MacCabe was surveying the site of a new town on the shores of Port Curtis under the protection of several detachments of Native Police. Maurice O’Connell was appointed government resident the following year, resulting in an influx of free settlers as land became available throughout the region.

In 1863, the town became a Municipality with Richard Hetherington elected Gladstone’s first mayor. The fledgling town was named after the British Prime Minister William Ewart Gladstone and has a 19th-century marble statue on display in its town museum.[15]

Development of Gladstone was slow until 1893 when a meatworks was established at Parsons Point.

On 2 March 1949, a major cyclone hit Gladstone, doing extensive damage to the town.[18]

In 1963, Queensland Alumina Limited established its alumina refinery on the site of the old meatworks. Gladstone’s port facilities were expanded and the city launched into an era of industrial development and economic prosperity.

From Wikipedia: “Gladstone’s primary industries are mining-related. The Port of Gladstone is the fifth largest multi-commodity port in Australia and the world’s fourth largest coal exporting terminal.[39] The port consists of a number of wharves and terminal facilities. Boyne Wharf is used by the Boyne Island aluminium smelter and was opened in August 1982.[40] The western harbour basin has been expanded, primarily to allow increased exports of liquified natural gas (LNG). Furthermore, in 2016, a plant was constructed on Curtis Island to produce and export LNG, a construction project that contributed heavily to city’s population and housing boom.” EDIT: there are now 2 more LNG plants on Curtis Island and the boom has turned to a bust.

“Major exports include coal, alumina, aluminium, cement products, sodium cyanide[41] and ammonium nitrate.[42] Each year 50 million tonnes of coal passes through the port, making up 70% of the total exports.”[43]

“Gladstone harbor is within the World Heritage Area of the Great Barrier Reef and has historically supported a thriving seafood industry.[44] Dredging in the harbor has led to high levels that pose a threat to seagrass beds and other marine life. In August 2011, a Fisheries Queensland spokesman said they received reports of fish with milky eyes.[45] A spokesman from the Gladstone Fish Markets claimed that diseased fish were still being caught in large numbers in November 2011.[46] Losses to the local seafood industry have been estimated at A$36 million a year”.[44]

Gladstone is also a tourism destination, with cruise ships regularly docking at the port EDIT: what is the future of this industry in the light of COVID-19? It may not be viable any more.